Menu
Log in
Register
You are using an out of date browser. It may not display this or other websites correctly.
You should upgrade or use an alternative browser.

Contributor
Insider
With the onset of 2022, a very strange bug appeared, if you have a welcome message configured on the teamspeak server in the (modal) mode, then after connecting to the server, the bot does not work properly, the scripts do not work, the bot sees only itself on the server, it is impossible to load an avatar, and probably still a lot of things don't work, he can only play music. As strange as it may seem, the problem is in the welcome message of the server in modal mode, but what is even more strange is that the problem appeared precisely with the onset of 2022. I hope flyth will read this post and be able to fix this problem.

Do you perhaps get the same error? Check the Sinusbot start log. For me also since this year nothing works

Contributor
Insider
I also heard reports of Sinusbot being broken from two of my friends, are you saying that if you disable welcome message, it goes back to normal state - working?

Insider
I can confirm the issue.

is awesome!
Contributor
Insider
Are you talking about the membership screening?

DrWarpMan said:
I also heard reports of Sinusbot being broken from two of my friends, are you saying that if you disable welcome message, it goes back to normal state - working?
Click to expand...

No, apparently it's because when the bot was restarted in 2022, it stopped responding. Also newly installed bots do not work

Staff member
Developer
Contributor
I'll take a look at it tomorrow, thanks for notifying and offering help with debugging - I've already got some ideas out of it!
It's most likely one of two things that's causing the issue and both would be rather easy fixes.

is awesome!
is uber awesome!
I wrote about the same issue to @DrWarpMan in private message but I will copy and paste it here, because I think it is a really detailed version of the bug itself, maybe it can be helpful for someone.


After some testing with a random script and doing some stuffs in the Sinusbot interface, something happened under the hood and my Sinusbot is almost totally dead now. I'll explain you in as much as details as I can.

All the Instances can join to my server. They have all the permissions, everything. I have my admin account in the User Account section, my profile is registered. From the back-end sight everything works, but... NONE of my scripts are working right now. None. But the interesting part comes here... When I type in the "!help" command to the bot or the "!register" it does not even respond. Nothing. I tried this on many different servers with many different UIDs but it still doesn't work. The latest Linux and Sinusbot is installed to the server, so nothing is outdated or something like that.

My first red flag came, when I noticed the bots which had the "Reconnect" script enabled, they were disconnected from the server. Not connection lost, the simple disconnect message came up (<22:16:48> "Szerver kezelő" disconnected (Requested via API.). I was thrilled because nothing really happened. They were just keep doing this. After 1 or 2 minutes online, they disconnected and then joined. And so on, and so on...

I have this script installed to my Sinusbot. The second red flag comes here... It managed to edit the channels which it should have, but it perceived things as no one was on the server... like what? The bot edited the channel but "wrongly". It kept displaying 0 Admins online, it edited the channel too but yeah... nothing.

No commands are available to the bot, you can't do anything with it right now... Restart did not work, any updates did not work...
After disabling the Modal message on my main server, where my bots were actually connected, I had to restart the Sinusbot and everything works fine now... So it is not even enough to join to another server and test it there because if you have one single instance, which is connected to a server, which has modal message, you're done.
Last edited: Jan 2, 2022

Ok, I can confirm, works for me again!

Very curious, the error appears only in the new year, before that I could not detect it.
Last edited: Jan 3, 2022

I updated and my scripts still are not working at all on this new version. They work when I restart the bot and when it connects it triggers one of the scripts as intended, but then it instantly stops working.


Tutulowsky2 said:
After disabling the Modal message on my main server, where my bots were actually connected, I had to restart the Sinusbot and everything works fine now
Click to expand...

is awesome!
is uber awesome!

omano said:
Can you elaborate on how to get it work again?
Click to expand...

First of all, you have to disable the modal message on your server: Edit Virtual Server -> (in the "Host Message" section) Message Mode: No message (NONE)
After this, hit "OK" and then restart your Sinusbot server or whatsoever, just restart your Sinusbot. After these options made, reconnect your bots to the server and it should work again.

Thanks, I will try to mess with these settings. So far no luck.

//EDIT: yep I can't have it t owork on my own TS server, but it works on my friend's TS server with similar settings. Tried to recreate the bot Instance, same issue. I'm on the new updated version linked above though.
Last edited: Jan 4, 2022

flyth said:
This version hopefully fixes the issue. Please let me know, if this doesn't help.
Click to expand...

Insider
I haven't tried beta 15 yet, but I've noticed that the bug actually started happening on 2nd of January exactly, not 1st! 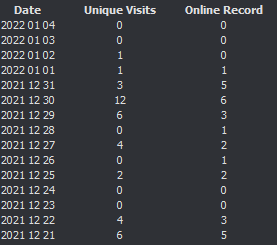 Those stats are from my backup server @ kiepownica.com and it looks like the issue still wasn't happening on 1st of january, but started on 2nd.

I've disabled host message for now on both servers and sinusbot works fine.

kapabac said:
Hello @flyth! Unfortunately, this version did not solve the problem...
Click to expand...

Hmm, it might be necessary to delete everything in ./data/ts3 after upgrading - I'll have to recheck.

What I don't understand on my side is why I can't have it to work on my TS server when it works on my friend's TS (two bot instances).

What would be the consequence of deleting ./data/ts3? I guess bot instances should be recreated, all scripts configuration would have to be redone, things like that? Or is it something like deleting useless cache?

//EDIT: I removed the folder inside ./data/ts3 and started the bot, started the instances (they would not auto reconnect on launch after removing the folder) and my instance is still not working, my friend's is.

//EDIT2: my non working bot instance, is not working on another server I have on another machine (TS version 3.13.3), but it is working on my friend TS server 3.8.0. All TS servers have the No Message mode but that doesn't seem to be the issue to me.
I can share something if it can help debugging, just ask me @flyth no problem (if you can not reproduce the issue on your side).
Last edited: Jan 5, 2022

Staff member
Developer
Contributor
Thanks for the feedback! Here's another version for you to test. I missed a second date field in the TS config that might have to do with the modal window appearing.
Some background info: It's important for the bot to be able to prevent any kind of modal windows since it blocks the main thread of the client, which then leads to timeouts in the scripting engine. Some of those possibilities are mitigated by letting the client assume, it already showed them and doesn't need to check again for updates for some time. I'll try to find a better way to handle this in the future but until then, I hope this version does work again.

If it doesn't work on first try, please empty ./data/ts3 again. That folder is indeed just a "cache" of the TS3 client data and has got nothing to do with the bot itself or the configuration of scripts etc. So yeah, it's safe to delete

This sounds odd, but as the issue just got introduced, I hope that it's still a modal being triggered after a specific date (I had set a fixed date (2022-01-01 as you've probably figured out by now) a couple of years ago, which I forget to increase - shame on me)
You must log in or register to reply here.
Share:
Facebook Twitter Reddit Tumblr WhatsApp Email Share Link
Top